Icame across some photos I took a couple of years ago that I had never looked through until last night.They were photos from a very special visit to the World War II Tatura Internment Camp.

My friend Ben was visiting me from SE NSW where he lives and I happened to look in the Shepparton Newspaper to read a notice advising that one of the Tatura Internment camps would be open to the public that weekend. It is only open one day a year to the public. This is where Ben’s grandfather was an internee. I was amazed how the universe worked that Ben had met me and happened to be in Victoria,  that I had spotted it in the paper, that Ben was visiting that weekend and we free to go, so Ben, my son Jaiman and I went. It was a very moving visit. I was so pleased Ben could get to visit. 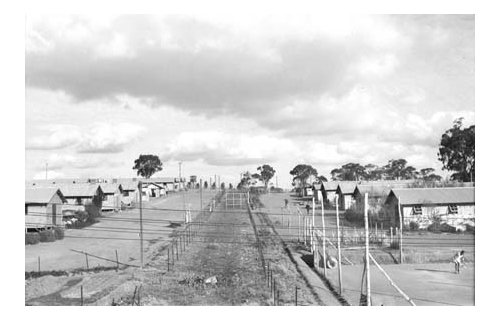 Division between Compounds A and B at Tatura No.1 camp

Â There were 7 camps in the area during World War II which held about 4000-8000 people at any one time. 3 camps housed Prisoners of War who were enemy servicemen captured in various theatres of war around the world and transported to Australia for the duration of the war. The remaining 4 camps held internees who were civilians living in Australia or other Allied territories and countries at the outbreak of war and were deemed to be a security risk because of their nationality. The camps were situated in the Goulburn Valley as food was plentiful here and there was a good supply of water from the Waranga Basin.

Camp 1 was opened in 1940 and housed German and Italian internees. It was divided into two compounds seperated by barbed wire. The men were initially housed in unlined huts and more huts had to be built as the internee numbers increased. The mess halls were the only heated rooms in the camp and during the colder months these became overcrowded. The internees developed tennis courts, workshops, a newspaper, and flower and vegetable gardens. Some ran small businesses such as haircutting and tailoring. Camp 1 also had a first class hospital

This is what Ben wrote about his grandfather Willie (William Cremer) –

In the 1940’s my German grandfatherÂ Willie Cremer (Opa to me) and his family were living in Persia (Iran), where he was working as an engineer.At the outbreak of WWII, the Allied forces took my grandfather as an internee in 1941, he was a civilian & not part of the German army.

My grandmother, Lotte Cremer (Omi to me), then made the difficult & hazardous wartime overland journey back to Germany with her 5 children. My mother Sigrid and her twin sister Ingrid where the youngest and just 6 weeks old. Life for them in war time Germany (taken in by relatives in their home town Benolpe) was very hard, with severe food shortages and Allied aerial bombings.

Willie was taken by ship to Adelaide and then on to Internment Camp 1, Tatura VIC for 5 years. In letters to my grandmother he said conditions within the camp where reasonable, with adequate food and the guards where pleasant.

After his release, Willie wished to stay in Australia & although life for a German, straight after the war, was not easy in Australia, he eventually saved enough money to bring his family over from Germany. Willie & Lotte where separated for 9 years.

With much hard work the Cremer family eventually bought a house in the then outer suburb of Beecroft, Sydney. Years later Willie bought an old school house in Beaumont (Kangaroo Valley) NSW, as the area reminded him of Germany. In 1974, aged 69, he died of a heart attack in the surf at 7 mile beach. My cousin now owns and lives in the family house in Beaumont.Funnily enough, where I now live near Bega NSW, reminds me of the way Kangaroo Valley was back when I was a child.

I was only 4 when Willie died. His ashes & later my grandmothers ashes where placed at his beloved home in Beaumont. I have strong memories of his kind and gentle nature & I can definitely feel his presence whenever I visit Beaumont.  “

Sketch of Willie done by another internee

We were all very interested to hear about the camp

Ben sharing what he knew of his grandfather

inscriptions on the wall inside the ‘prison’

The ‘prison’ for misbehaving individuals. Unsurprisingly it was the most robust building and is the only building still intact today.

In October of each year the Tatura museum conducts a bus tour to the site of Camp 1 for interested people as all the sites are now in private hands general access is not possible. The Tatura museum is open at other times and  has a huge collection of photographs, art and craft work, records, recollections and other archival material recovered from the former Prisoners of War and Internees in the Tatura Area during WW2, many of whom remained in Australia after their release. Tatura is 167kms north of Melbourne and 21kms west of Shepparton in Victoria.

« Leanne & Sean – Bright, VICTAKAKO AND OWEN TAKE A FAMILY WALK ON THE EVE OF THEIR WEDDING â€¦â€¦ »